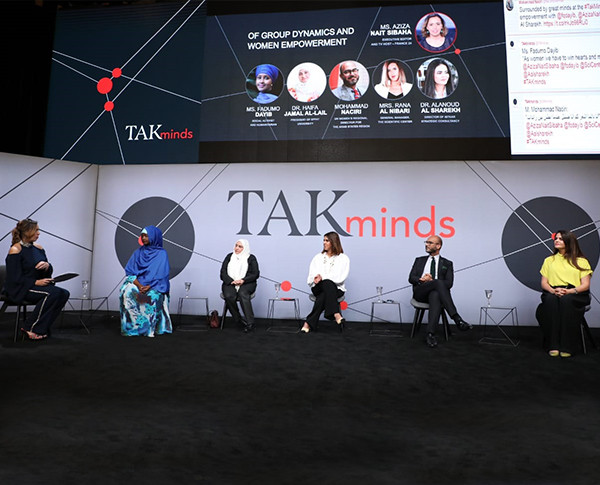 TAKminds is a new platform, launched by TAKREEM, an initiative founded to recognize Arab talent. The forum which aims to highlight how change-makers and emerging talents, addressed current societal challenges by weaving together the threads of education, technology, business, media, and art. Open communication, global community, cross-cultural dialogue, citizen entrepreneurship, and, most importantly, integrity is what TAKminds strongly believes in. Together, these principles comprise the core values under which TAKminds strives to accomplish its mission.

Ricardo Karam, Founder of Takreem, stated, “We as citizens are experiencing times where we can only be engaged; or else shortly be devoured by the steamroller of an accelerated environment marked by ruptures and exclusion, induced by digitization, wars, revolutions, and depletion of resources. Whilst enabling innovation and opening up possibilities, this exponential growth has also generated many left-outs. Paradoxically, it is from one of the most troubled parts of the world, the Middle East, that awakening is emanating, embodied in creativity, attention, and inclusion. Its beacons are women, social entrepreneurs, young innovators, architects, artists, and civil society activists.”

He shared that TAKminds aims at highlighting how such change-makers are addressing the post Arab Spring challenges, integrating past, present and future, nature and technology, modernity and tradition, women and men, disabled and healthy. He stressed that the panel discussions would explore how, beyond violence and chaos, the Arab world is being shaped by young emerging talents and conscious concerned citizens who are also citizens of the world. “Leading voices from across the region and the Arab diaspora, including Takreem laureates, board members and friends, have gathered and connected through this forum which aims to be a platform facilitating initiatives engaging in the promotion of sustainable development of an inclusive Arab society.” Karam urged the participants to use the platform as the cornerstone to rethink their cities, empower communities and take steps to reverse their negative environmental impact.

The Chief Guest Speaker at the event was Nobel Peace Laureate Kailash Satyarthi, who moved the audience with his story, described the plight of millions of children around the world and stressed the urgent need to end all kinds of violence against them.

Satyarthi, who won the Nobel Peace prize in 2014, has been a tireless global advocate of children’s rights for four decades after leaving a lucrative career as an Electrical Engineer to start the ‘Bachpan Bachao Andolan’ which has rescued children and their families from slavery. Under his aegis, the movement has rescued over 87,000 children from the scourge of bondage, trafficking, and exploitative labour so far. Satyarthi provided the audience a glimpse into his unrelenting efforts to end child slavery, trafficking, forced labour and violence which has fortunately received international support culminated in child protection and welfare-related clauses being included in the Sustainable Development Goals (SDGs) of the United Nations in September 2015. He shared the story of conceiving and leading e largest civil society networks for the most exploited children with the Global March against child labour, that engaged 103 countries and mobilized unions, civil society, and children in covering 80,000 kms which resulted in the successful adoption of ILO Convention 182. Satyarthi shared details of his other global campaigns, efforts and initiatives, from Rugmark certification for labeling child labour free carpets to ‘Laureates and leaders for Children’. He challenged and encouraged each member of the gathered audience to do their part, however small, to make a difference. He shared his high hopes for the youth as positive agents of social transformation and shared his 100 million for 100 million Campaign, a global intervention to mobilize 100 million youth for shaping a better and promising future for 100 million less privileged peers.

The forum featured three panel discussions and two inspirational speakers. The first panel on the topic of ‘Cities of today, talents of tomorrow’ was moderated by Arwa Damon Senior International Correspondent at CNN and featured Wael Al Awar, Emile Haddad, Romy Hawatt, Khaled Janahi, and Melek El Nimer as panelists. They discussed issues of innovation and inclusion in smarter cities being built today and highlighted the ways in which urban structures such as sport and touristic facilities, tech hubs and clusters can promote peacebuilding, impact life in the city, and help create new centers around which communities can gravitate.

The second panel, “Art, an ideal for sale?” took a look into how art has been used to express the struggles and dreams of entire generations in light of the cataclysmic changes in the Arab region in recent years. The panel moderated by Laila Al-Qatami, Managing Director of the Sheikh Abdullah Al Salem Cultural Centre with panelists Dr Tamara Chalabi, Raneem Zaki Farsi, Ali Khadra, Elie Khouri, and Ahmed Mater expounded on the ways in which the Arab art market reflects the changes in the region and discussed the role of contemporary art institutions as places of cultural exchange, their inclusiveness and peacemaking qualities or whether they were mere galleries catering to the taste of the elite.

The third panel on the topic of ‘Group dynamics and women empowerment’ was moderated by Aziza Nait Sibaha Executive Editor France 24 and included Rana Al Nibari, Dr Alanoud Al Sharekh, Mohammed Naciri, Dr Haifa Jamal Al-Lail and Fadumo Dayib as discussants on key women’s issues, focusing on the power of networks, new role models of the Arab world and the impact of new technologies in information and communication on the ways in which women today combine their efforts.

Manal Rostom, the first Arab veiled model to appear in a Nike Middle East Campaign, shared her experience in a talk titled “Breaking stereotypes through sports”. Rostom who is a pharmacist, fitness instructor, scuba diver, cyclist, mountain climber, marathon runner and above all a very inspiring woman, also founded the online community ‘Surviving Hijab’ and strives to change how the world perceives Arab women. She recounted her experience as a third culture kid and her struggle to find her own identity, her experience of contending with society’s expectation and pursuing her dream to climb mountains against opposition. She encouraged the youth to have open conversations with their parents about their passions and shared her own dream of being the first Egyptian woman to climb Mt Everest.

Mostafa Salameh is an explorer, fundraiser, author, and motivational speaker, is one of only 13 people to ever climb the Seven Summits and conquer the South Pole and the North Pole – known as the ‘Explorers Grand Slam.’ In his talk, ‘Dreams of a Refugee’, that shares the title with a book he published in March 2016, he expressed his passions for mountaineering, the challenges he overcame in order to do so and his new goal to effect change in the community, raise funds for different charities and inspire the young to pursue their dreams. He also announced that Netflix is producing a movie based on his life. “Everyone has an Everest in their life and we can climb it by believing in ourselves. If you believe in yourself, others will too”, he shared and added that he was optimistic about positive change and a breakthrough coming to the region.

TAKminds is also a non - partisan platform that does not belong to any political, partisan or national movement that works without prejudice, aimed solely at improving Arab communities and creating sustainable futures for future generations.