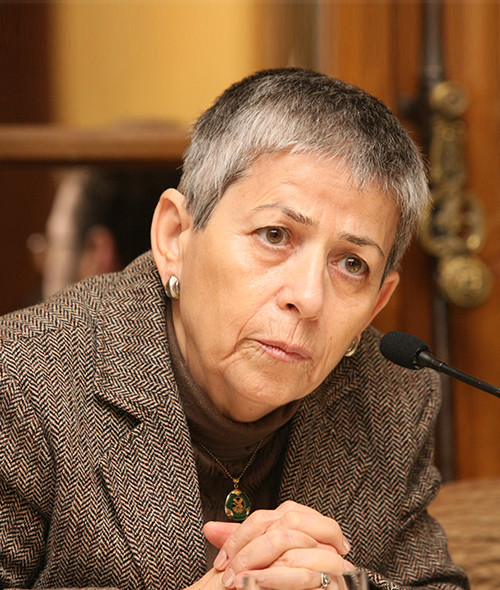 Mrs. Hanaa Edwar has been an activist for human rights for more than 40 years. She is one of the founding members and the general secretary of a non-political, non-sectarian and non-profitable association in Iraq called Al Amal. This association, established in 1992, is dedicated to improving the socioeconomic conditions of the Iraqi people. She is also the co-founder and heads the coordination committee of the Iraqi Women’s Network, which consists of more than 80 women’s organizations all over Iraq. Edwar is also the co-founder of the civil initiative to preserve the constitution.

She successfully won a Supreme Federal Court lawsuit that forced Iraqi parliament to resume its sessions in late 2010. Moreover, she is a member of the executive committee for Iraq National Congress and the presidential committee of The Iraqi Council for Peace & Solidarity. Edwar currently serves on the board of Asuda, an Iraqi based NGO with a mission to protect women against violence. Edwar has been a humanitarian activist for many years, working in Kurdistan and Baghdad.

A lawyer by training, since her student years, her work encompasses women’s rights activism and civil society organizations. From a very young, she joined the Iraqi Women Association and was arrested in 1963. She escaped from prison and fled to Germany to represent the Iraqi Women Association at the International World Federation of Democratic Women. She later relocated to Lebanon then to Syria, becoming a prominent activist against dictatorship. Edwar led countless campaigns for gender equality to enhance women's role in decision-making and the constitutional process. In 2010, she was part of the expert team that served for two years on drafting the Law for the Protection of Women from Domestic Violence in Iraq. In 2011, she was awarded the Sean MacBride Peace Prize by the International Peace Bureau for her contribution to the advancement of democracy and human rights and her stand against violence and war. In December 2011, the United Nations mission in Iraq awarded her the Appreciation Certificate of Human Rights Defender.