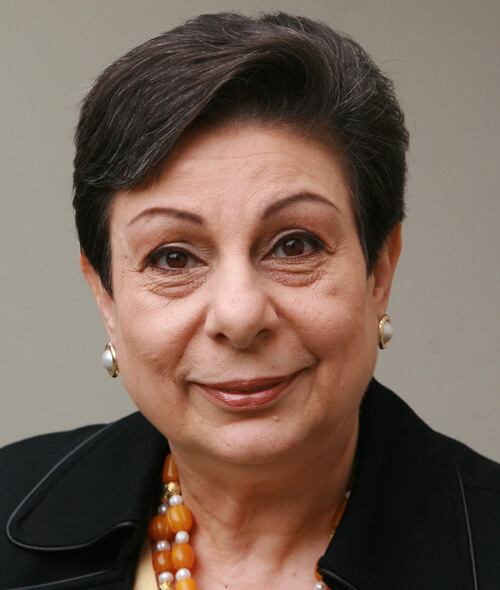 A distinguished Palestinian leader, legislator, activist, and scholar, HE Dr. Hanan Ashrawi has served as a member of the Leadership Committee and as an official spokesperson of the Palestinian delegation to the Middle East peace process. She is a PLO Executive Committee Member, Member of the Palestinian Legislative Council, and Head of the PLO Department of Culture and Information. In 1996, Dr. Ashrawi was appointed as the Palestinian Authority Minister of Higher Education and Research, but she later resigned from the post in protest at the non-implementation of reform plans in governance and peace talks. In 1996, she was elected on the Palestinian Legislative Council representing Jerusalem. As a civil society activist, she founded MIFTAH, the Palestinian Initiative for the Promotion of Global Dialogue and Democracy, the National Coalition for Accountability and Integrity, and the Independent Commission for Human Rights.  She serves on the advisory and international boards of several organizations, including the World Bank Middle East and North Africa, the United Nations Research Institute for Social Development, the International Human Rights Council and many others. Hanan is the recipient of numerous awards, including the 2005 Mahatma Gandhi International Award for Peace and Reconciliation and the 2003 Sydney Peace Prize. She holds a PhD in Medieval and Comparative Literature from the University of Virginia.