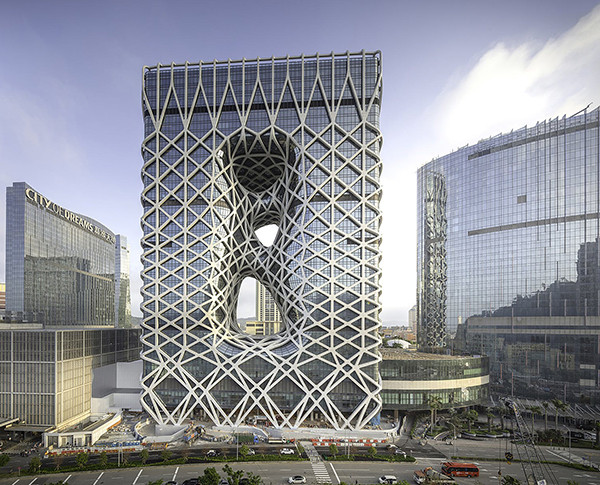 The Morpheus hotel’s futuristic-looking design – which boasts the world’s first free-form exoskeleton – has carved out its own distinctive visual identity, while accommodating 780 ultra-luxurious hotel rooms and a VIP casino. One of the last designs by TAKREEM Lifetime Achievement Award recipient, Dame Zaha Hadid's Morpheus hotel in Macau found solutions to an unusual set of challenges.

"Is Morpheus, the late Dame Zaha Hadid’s only building in Macau, an example of the “weird” architecture that Chinese President Xi Jinping railed against in 2016? The monolithic 40-story structure, wrapped in a gleaming aluminum exoskeleton, shares the appearance of the grandiose architecture that so irked the Chinese leader.

Yet closer examination reveals the hotel’s futuristic-looking design – which boasts a world-first, free-form exoskeleton – is a groundbreaking solution to an unusual set of challenges.

First, the site offered a relatively tight 6,850 square meter (74,000 square foot) rectangular building footprint, the last parcel of land to be developed within the City of Dreams entertainment complex on the Cotai Strip. Owned and developed by Melco Resorts & Entertainment, the urban resort comprises four other hotels, and a variety of luxury retail, entertainment venues, and casinos.

The design is also a response to an existing condition. According to the Morpheus project architect and Zaha Hadid Architects (ZHA) associate director Viviana Muscettola, the new superstructure had to be adjusted to fit a site already with foundations, which had been intended for serviced apartments, designed by a different architectural firm.

Then there was the unexpected death in 2016 of Hadid, the Pritzker Prize-winning architect, two years before the completion of the Morpheus. It was one of 36 projects in 23 countries the company was working on when she died of a heart attack. The practice, now led by partner Patrik Schumacher, is behind several other Asian projects to be completed this year, including the Changsha Meixihu International Cultural Centre, the Nanjing Culture, and Conference Centre/Jumeirah Hotel, and Leeza Soho, a skyscraper in Beijing with a tall, twisting atrium.

According to Muscettola, who joined ZHA in 2004, Hadid sometimes created two competing design teams to come up with the most innovative new designs. In this case, the teams helped explore the challenge of creating a distinctive building with structural support provided from the outside.

The Morpheus hotel is, however, notably different from much of the late Iraqi-British architect’s signature curvaceous, sculptural designs, such as the Jockey Club Innovation Tower in Hong Kong.

The winning design, which melds function with dramatic sculptural form, sees two towers wrapped – and supported – by an aluminum exoskeleton. The towers accommodate about 780 ultra-luxurious hotel rooms and a VIP casino, and functions via connections at the ground floor podium and rooftop, while skybridges create three distinctive visual “voids” or spaces.

The mesh-like exoskeleton curves around these skybridges, adding a surreal inside-outside experience of the restaurants and VIP lounge they house.

“The number of columns is greatly reduced, and this gives us more flexibility in space planning of the hotel facilities, and gives the interior designers fewer headaches. In the free-form area, there are no columns supporting the exoskeleton, and this creates large open-plan areas that we have used for the hotel lobby at ground level and other public areas at higher levels between the hotel towers.”

Two primary structural components support the building. Firstly, two reinforced concrete cores extend the full height of the structure. From these, the floor beams stretch to the perimeter of the building, passing over one intermediate supporting column. At the perimeter, the floor beams pass through the facade to connect with the exoskeleton. The structural form between the two towers is extremely complicated, with three holes formed in response to the twists and turns of the exoskeleton – which not only supports itself but also the facade and the restaurants and club lounge that sit between the voids at level 21 and 30.

At the ground level, guests enter via a 35-meter-high atrium lobby with walls and reception bristling with white and silver faceted marble and decorated with Hadid’s sleek white Nekton stools. Twelve glass-clad lifts whisk guests upwards through the atrium and skybridges to Chinese fine-dining restaurant Yi, a VIP lounge decorated with sculptural Hadid-esque furniture, and a pair of cocktail bars in a minimalist, monochromatic palette."

(To read the full article, follow the source link below)