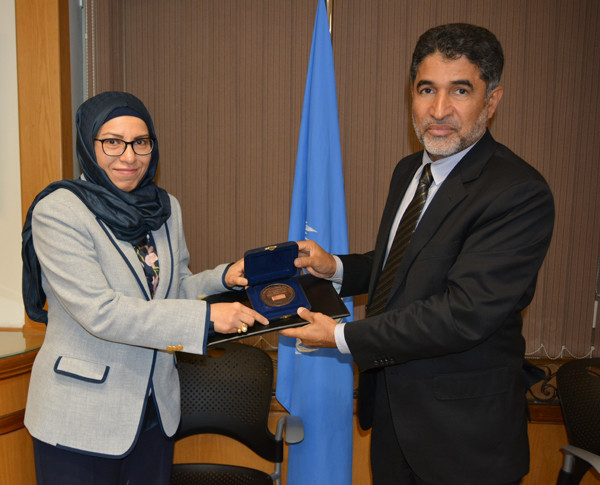 TAKREEM Selection Board member Professor Samar Al-Hamoud, consultant colon and rectal tumor surgery at King Faisal Specialist Hospital and Research Center in Riyadh, won the 2019 Cancer Control State of Kuwait Prize for the Eastern Mediterranean Region of the World Health Organization in recognition of her efforts and contributions in the field of cancer control and prevention. The award is one of many managed by the World Health Organization. Those awards are offered in appreciation of the efforts of distinguished scientists and researchers who have made outstanding contributions and outstanding research in the field of cancer control and prevention, through contributing to the formulation of national strategies and their successful implementation in the field of cancer, which contributes to strengthening Public Health.

Dr. Ahmed Al-Manzari, WHO Regional Director for the Eastern Mediterranean, handed over the award to Professor Al-Hamoud at the headquarters of the WHO Regional Office for the Eastern Mediterranean in Cairo, which is one of six WHO regional offices around the world, and provides services to the Eastern Mediterranean Region, which includes 21 member countries and has a number Its population is approximately 679 million. Dr. Al-Hamoud, who is the first doctor from the Kingdom of Saudi Arabia to receive this award, expressed her pride in this appreciation, which reflects the high level reached by the Saudi competencies in the effective contribution in the field of cancer prevention and prevention and to enhance the role of Saudi women and their influential presence in the international scientific community.