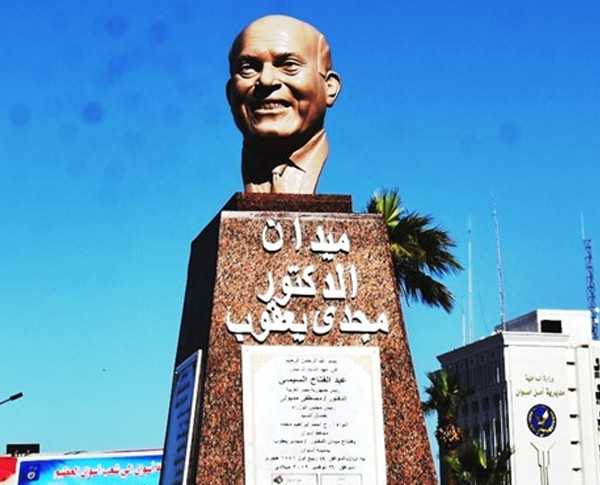 A monument featuring a bust of the well-known surgeon with his name engraved under the statue was installed in the middle of the new Aswan Courts complex. The opening of the new square took place in a ceremony attended by Yacoub and his daughter Lisa, as well as a number of Egyptian officials, including President of Aswan University Ahmed Ghallab and President of the Arab Academy in Aswan Atallah Hashad. On the sidelines of the ceremony, Yacoub expressed his deep appreciation for the recognition, thanking the people of Aswan and other officials involved in the project.

Yacoub, who was appointed to supervise the Cardiac Care Unit in Port Said’s Nasr Hospital, went on to say that he appreciated the invitation to witness the recent launch of the new Comprehensive Social Health Insurance System on Monday November 25. The statue, which took nearly two months to complete, was constructed by Mohsen Selim, Professor of fine arts at Assiut University, who relied on Aswan’s clay as well as fiberglass to build the bust of the famous heart surgeon. Selim told Al-Masry Al-Youm that he wondered how he could possibly create a statue for a legend like Yacoub, stressing that the Egyptian-British surgeon is known for his kindness, as well as the fact that he puts a smile on the face of every child he treats. Yacoub is the founder and director of research at Harefield Heart Science Center and is currently a professor of Cardiothoracic surgery at the National Heart and Lung Institute at Imperial College London. The renowned surgeon has been involved in extensive philanthropic work in a number of areas, including Egypt’s Cairo and Aswan, Kigali in Rwanda, and Jamaica.