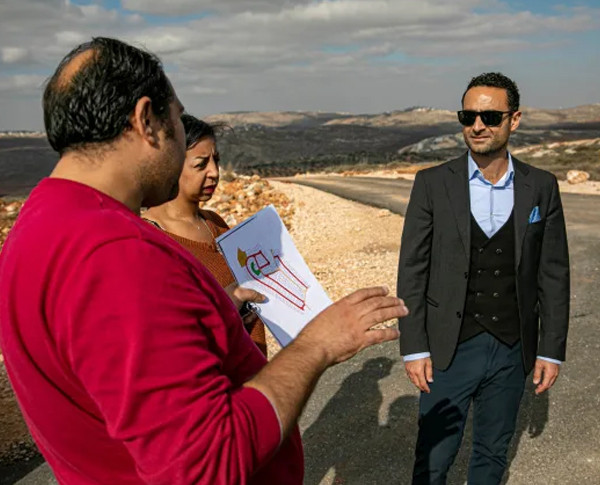 TAKREEM Laureate, Khaled Sabawi, Back in Palestine With a Dream

2013 TAKREEM Laureate Khaled Al Sabawi had a vision — developing affordable building lots in the West Bank to Palestinians. But sales stopped almost completely due to settlers’ harassment and the pressure they put on the army.

The Israeli army officer extended his hand to Khaled Al Sabawi and said with a smile, “Sabawi or Wasabi?”

Sabawi, a 36-year-old Palestinian-Canadian entrepreneur, immediately knew that the man standing opposite him, Lt. Col. Elad Goren, had done his homework. He had clearly read the blog in which Sabawi described the border control officer at Ben-Gurion International Airport who had trouble reading his name and had confused it with the spicy Japanese condiment. The meeting with Goren, who heads Israel’s District Coordination and Liaison Office for the Ramallah area of the West Bank, took place on July 4 at the headquarters of the Israeli Civil Administration in the West Bank, built on Palestinian land of El Bireh. The pair weren’t meeting to discuss Sabawi’s great passion – the startup he founded in Canada, that encourages people from around the world to develop and write their own screenplays, by means of competitions. What had brought Sabawi to the Civil Administration office was his position as CEO and vice chairman of a real estate firm founded by his father. More precisely, he was there to discuss several acts of vandalism that the company suffered on land it had bought in the West Bank Palestinian village of Turmusaya, northeast of Ramallah, a few days after infrastructure work began on June 12.

At the time of the July meeting at the Civil Administration, the vandalism was still relatively minor. Twice, the red pennants that surveyors had placed on the land to mark its perimeters and internal boundaries had been removed. “The people of Israel lives” was spray-painted in Hebrew on a rock, along with a Star of David.

Later in July, as Sabawi’s meetings with other Israeli officials continued – including talks with the head of the Civil Administration, Brig. Gen. Ghassan Alian, and the head of the army’s Central Command, Maj. Gen. Nadav Padan – the vandalism intensified and grew in frequency. There were daily incursions onto the company’s private property. Armed Israeli civilians intimidated workers and a contractor, even forcing them off the site several times. The tires of a surveying vehicle were punctured. Its windshield was also broken and expensive equipment was stolen from it. Israelis also erected tents and trailer homes (later removed) on the site. Demonstrations and prayers were held there. And newly laid asphalt on a road was broken up in several places. Yet not a single suspect was apprehended, arrested or put on trial. At a meeting on July 29, Padan suggested to Sabawi that the army put a watchtower in the middle of his property. Sabawi, who had previously heard the idea from other Civil Administration officials, replied that it would drive buyers away. “I told them ‘You can’t just put a military outpost in the middle of private property before you’ve proven that there’s a security threat. And you can’t prove that there is. And if there is – it isn’t coming from us."

Why did the unknown perpetrators begin their harassment? On July 2, an article on the Ynet news website reported that residents in the area of the settlement of Shiloh and smaller associated settlements had decided that Sabawi was building a “Palestinian town” nearby, and that the Civil Administration had approved the plan because it was told the work was being done to lay the groundwork for agricultural paths. Among the smaller settlements associated with Shiloh north of Ramallah, there are a number of unauthorized outposts that have a documented history of violence against Palestinian residents of the area. It was through the use of such violence that they gradually took over a large portion of the space between the Palestinian villages.